It was already raining as we left the hotel around 9AM. The original plan was to head down south and spend the night near Karlsruhe which was 60+ miles away. So I wanted to get going right away. But, my brother insisted that we get something to eat first. I suggested that we look for a place to eat on our way. He wasn’t having any of that. He was gonna have his breakfast first and that was the end of it.
So we headed in the opposite direction, towards north where we saw several shops and restaurants the day before. We could not find anything open. It was a Sunday and it looked like a ghost town. Here in the U.S. most businesses don’t close their doors on the weekends. Obviously, this was not the case in Germany, well at least not in this town. 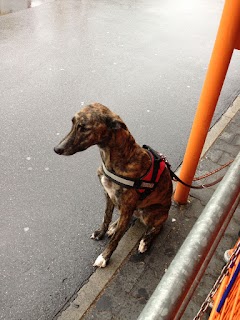 By the time we found a small coffee shop that was open few miles up north, the light rain had turned into a full blown one. We made quick work of the croissants & coffee and headed south. As we veered off the main road onto bicycle trails the weather got really nasty. We were now riding on semi-flooded trails under torrential rain. The thermometer on my handle bars showed a bone chilling 36 degrees Fahrenheit.
The scenery didn’t really help lighten up the mood either. The trail cut straight through the surrounding tree lined fields, often flanked by a railroad or an irrigation canal. Frequent patches of forests and occasional sightings of farm animals broke up the monotony. Houses were few and far between. It was a far cry from the small villages we encountered the day before with their closely packed buildings and narrow streets. This just wasn’t our happy place.
About 30 minutes into the ride, my brother started complaining about the cold and the rain. His “rain jacket” wasn’t “working” at all. I wasn’t surprised. Soon after we landed in Germany, it became clear to both of us that we were ill prepared for the weather. We both have been in Germany on several occasions in the past, all around June-July. We bought our gear based on those experiences. We were expecting cool weather and short periods of rain. But, on this trip it just happened that the storm of the century was hovering over us and the continent.
We decided to buy some jackets for the exceptional cold weather. Because neither of us can speak German, we took the cousins along to help overcome the language barrier. There was a particular set that we both liked. It was light weight and felt warm. Best of all, we were told, they were water proof. However, by the second day of the ride, we realized that they were not water proof but more like water-repellent. I am quite sure that the distinction between the two was lost in translation.
Our layers were identical in most part. We were wearing the same kinds of water proof pants and booties. What set us apart was the very top layer, our “rain jackets”. I chose to order a rain proof bicycling riding jacket from the UK based on the positive reviews. I figured with 160 rainy days on average, Brits would be the best judges of such gear. To protect my head from the rain I used a water proof helmet cover. The combination served me well through the duration of the trip. My brother on the other hand, against my advice, picked up a very fashionable water repellent hoody from REI in the States. He was worried about his head and neck getting wet. I just did not feel like pushing the issue any further. It was his decision.
Here we were a month later, he was paying the price for his bad decision. I didn’t initially fully realize how dire the situation was when he started complaining. This was probably because I just assumed that he was just like me, a little sweaty and uncomfortable but mostly dry. He wanted to stop, but there was no place to take shelter and there was no point of standing under the rain. The conversation got a little heated between us. We had no choice but to push forward. After a few miles, we eventually spotted a covered loading bay next to a factory where we could take shelter. It wasn’t until then that I appreciated the seriousness of the situation.
As he peeled off his layers, I could clearly see that his clothes were soaked by the rain. He was shivering. I told him that he needed to change into dry clothes. We stood there for about 15 minutes in silence. The rain was getting worst by the minute. He must have gotten warm by then as the heated conversation resumed after a few minutes.
He said that he can’t keep riding like this. He wasn’t prepared for this type of weather. Neither of us were, I agreed. But what I didn’t agree was his solution to the situation. He wanted to rent car, drive down to Switzerland and resume the riding there. I was against the idea for many reasons. I wanted to ride across Europe. Part of the joy of visiting different places is emerging yourself into the local culture. You can’t do that when you isolate yourself from the rest by driving in car (as we often do in the States). Plus the stress of driving in unfamiliar places. Not the mention the financial strains of renting a car in Europe. The rental fees and the high fuel costs quickly add up. And finally, I didn’t want motorways dictating where we can and cannot go.
One thing we agreed on was that we needed to find a hotel and review our options there. But, we were in the middle of nowhere. I was having a hard time finding a hotel in the area. We decided that it was best to change our route and head slight west towards Mannheim. At best, we hoped to find something on the outskirts of the city, if not we would surely find something in the city center.
We were still faces with the same problem. Mannheim was about 18 miles away and my brother didn’t have any real protection from the rain. I suggested that we use his tent fly as that was the only water proof thing he had. We used one corner to anchor it under his helmet, and he held the tow other corners on the handle bar leaving the final corner to hang free over the rear of the bicycle. We had to stop frequently to adjust his cover, but it just worked; it kept him relatively dry until we found a hotel.

We inquired about rooms in a couple of the hotels on the outskirts of the city. One wasn’t to our liking and the other quote us some crazy nightly rate. By then my brother was dry thanks to the fly tent and in a better mood. We decided to push on to Mannheim.
As we entered the city limits, we were happy to spot a Park Inn hotel on Google Maps. We were pleased with the previous night’s accommodations with them at their Heppenheim location, so we decided to head over there. We rode over and along side the Rhein river and after a short detour we were relieved to pull in front of the hotel. My brother went inside to get a room as I waited outside with the bikes.
Unlike the one in Heppenheim, this hotel was located at a very corporate setting surrounded by other contemporary buildings that sat on large lots. It was no different than most business parks in the States. As I was waiting outside several men of African decent came outside to smoke. I tried striking a conversation with them. They said they were attending a conference and that they were from Sweden. I was curios of the topic of the conference as it seemed that the most, if not all of the participants seemed to be of African decent. But, they didn’t really look too keen to carry on with the conversation as they started to chat amongst themselves in an African language. It was about that time that my brother walked out. He said that the hotel was having an “unexpected number of conference participants” and the staff couldn’t get all the rooms ready on time. They had rooms for us but we just had to wait. The girl at the reception desk said that we could wait at the hotel restaurant while the rooms are being prepared. She was nice enough to offer us a cup of coffee while we waited. We gladly took upon her offer. 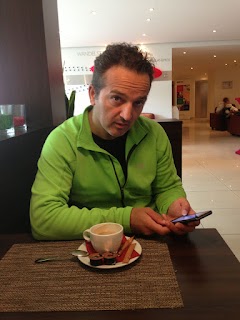 We finally checked in after an hour wait in the lobby. The rain had tapered off by then. We decided to explore the surrounding neighborhood and get something to eat. First few restaurants we spotted on Google maps were closed. So we decided to head over to a Turkish (Kurdish?) kebab house called City Döner. The food, service and personnel were just awful. That didn’t stop us from loading on with some much needed calories. We also ordered a pizza to go and took a cab back to the hotel.
Once at the hotel, we discussed about our options. It was raining just about in whole of Germany, France and Switzerland. Waiting wasn’t an option as the forecast predicted the rain to continue for another 10 days ! We had to get out. Nearest half-dry place was Italy. I pitched the idea of taking the train down to Venice to my brother. After some discussion, he gave in and said that he didn’t care as long as we got of this miserable weather. He wasn’t feeling too good and we suspected the he was about to come down with a cold.
I booted my laptop and started looking for a connection on the extremely useful German Railroad website bahn.de. We encountered three types of trains during our search: the trains that you couldn’t bring a bicycle at all; those you can bring a bicycle as checked in luggage and those with dedicated bicycle cars where you and your bicycle rode in the same car (more on these types later). Although there were plenty of seats on most trains to Venice, we couldn’t find anything that would accommodate our bikes. I also tried Milan with no luck. The only thing I can find heading somewhat south was a train from Heidelberg, Germany to Villach, Austria via Munich. From there we would take a local train into Udine, Italy. After a bit of tinkering we decided this was the best option and made the necessary reservations for the next day.
As you might have noticed I don’t have our GPS track posted on this page for this leg of the trip. The reason is that I simply don’t have one. I can’t recall whether I recorded one at all. It is quite possible that I neglected to do so because of the @#@^! weather. It is the same reason why I don’t have any photos.